This essay contemplates one of the underlying Japanese cultural tendencies, an emphasis on the significance of individual parts (as opposed to the whole), and its manifestation in the music of Tōru Takemitsu. Takemitsu’s surface musical language is based on the idioms of European modernism. However, his music is perceived by many as “Japanese-sounding,” although he clearly avoided sounds of traditional Japanese music or Japanese instruments in the majority of his works. Takemitsu’s early musical style was influenced by the music of Messiaen and Debussy, and those influences remained noticeable even though his compositional style changed over time. Despite the apparent Western compositional influence observed in Takemitsu’s music, I believe that one of the reasons that his music is thought to sound Japanese is because it privileges the same quality perceived in other Japanese arts and Japanese language: the significance of the parts.When the object of analysis or interpretation is an entire composition, analysts who are trained in Western music tend to perceive music as a unified “whole.” However, I question, does music need to have an organizational strategy that ties its compositional elements together to create this unified whole? Is the notion of a unity a Western construct that may or may not be applicable to music by non-Western composers? Is finding codes of organized sounds the best way to approach the understanding of musics by non-Western composers? Perhaps traditional methods of analysis to determine large and small sections and to identify large-scale coherence between those sections might not be suitable for analyzing Takemitsu’s music. Additionally the notion of  unity or “wholeness” might not be applicable to music by a composer who became increasingly aware of his Japanese heritage as he searched for his voice, admitting that it is impossible to escape from the influence of a culture in which he was born and raised.<1>In analyzing Takemitsu’s music, especially his music after the 1980s,<2> the significance of the “parts” takes on more relevance than does large-scale coherence in the interpretation of his music. The importance of individual “parts” is important in many aspects of Japanese culture, including traditional Japanese gardens, Japanese language and literature, and Japanese architecture. It is well known that Japanese gardens gave great inspiration to Takemitsu, who saw connections between them and the coloristic shades of sounds, which exist alongside other natural fluctuations.<3> Many of his works from the mid-1980s are modeled on Japanese gardens, especially those designed by the 14th century Japanese monk Musō Soseki.<4> I find it especially crucial to investigate how the metaphor of following the garden path is manifested in Takemitsu’s music.<5> 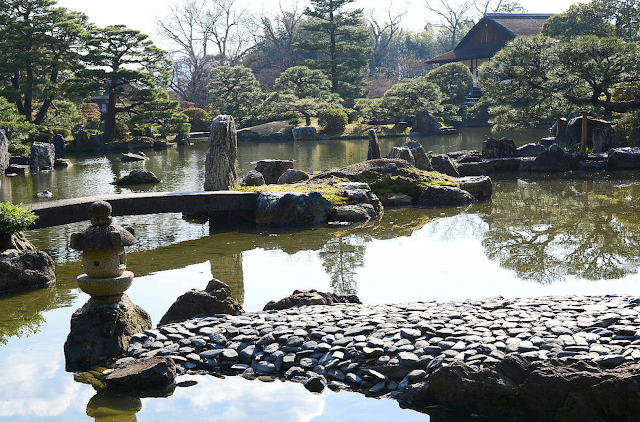 The strolling gardens (or kaiyūshiki gardens) were never meant to be viewed as a whole – the bird eye view of the garden has no effect or significance on the meaning of the Japanese garden. Rather, appreciation and contemplation lie in the garden’s details. Kanto Shigemori writes about the kaiyūshiki garden:<6>

“When the kaiyūshiki garden is viewed in two dimensions, it does not form a geometric or symmetric garden as in the Western gardens. The kaiyūshiki garden pursued diverse perspectives in all directions. The main characteristics of the two-dimensional plan of the kaiyūshiki garden is that the spectators are guided through their walk to appreciate, then led to contemplate while appreciating, and in that contemplation, they perceive poetry and purpose or effect of the objects at each turn. … The visitors are led to appreciate, to contemplate, and merge the experienced beauty and the illusionary beauty by placing themselves in a philosophical imagery. As the path guides them, not to just stroll through the garden, but to guide them mentally, the two-dimensional plan cannot be just simple repetition or materialistic change of color. … As the spectators walk through the garden, the landscape expands or shrinks as they find beauty in the darkness, or sweetness in the brightness, and the moss or grass dyes their footsteps green, or white sand blurs into the ground.”<7>

Paul Rudolph, who was considered at the time to be the champion of modern American architecture, critiqued this aesthetic. “The details of the various parts of kaiyūshiki garden in Katsura Imperial Villa (in Kyoto) are remarkable, but as a whole, it is lacking an appealing unification. I think there are too many details.”<8> The kaiyūshiki garden is a microcosm of the earth in which mountains and gorges are expressed by rocks and sand. Every part and every section of the garden interconnects organically; each are small variations of different themes and their boundaries are ambiguous.<9> Many parts of the garden are intricate and suggestive and they invite imagination – a stone garden lantern suggests an old unvisited Buddhist temple nearby; the sound of water heard through thick vegetation evokes a hidden ravine; and the strollers who arrive at the bottom of a gentle slope are reminded of never-ending mountain paths.<10>Namio Egami remarks on the Japanese cultural tendency to incorporate ideas or matters without thinking through all of the ramifications or without strictly planning.<11> For instance, the concept of city planning as a completed product was foreign to the Japanese.<12> In a smaller scale, Japanese architectural spaces began with a small space and gradually expanded outwards as needs arose. The whole was viewed simply a result of compilation of parts. Similarly, Japanese sentences are structured so that they force the reader to know the details before knowing the subject’s action.<13> Other examples from literature are renga, or continuous poetry, and zuihitsu (for a lack of strict definition this term is often translated as “personal essays”).Shūichi Katō also agrees that Japanese have a tendency to emphasize the “parts” rather than the overall organization or unity of the “whole,” and that the “whole” is simply seen as the accumulation of the related and organically evolving “parts.” This tendency is instantiated in diverse Japanese arts, culture, and behavior patterns.<14> Katō  argues that the fundamental basis of this tendency derives from the Japanese conception of time. He categorizes four basic concepts of time. They are 1) time that has both a beginning and an end; 2) time that has a beginning but not an end; 3) time that has an end but not a beginning; and 4) time that has no beginning or no end.<15>  When time is conceptualized as open ended it is impossible to quantify and structure it. Since there is no “entirety,” time cannot be divided into sections. Thus time is conceived as a compilation of each moment of the “now.” The “now” is not a fixed quantity, but a flexible entity that possess elasticity. Since time is not seen as objective, the partitioning of past, present, and future remains obscure.With this in mind, I invite readers to listen to Far Calls, Coming, far! (1980), one of the representative works Takemitsu composed in the 1980s.

Tomoko Deguchi’s research interests include music of Toru Takemitsu and other Japanese composers, musical narrative, film music, musical form in the 20th-century music, and intersections between music theory and culture and aesthetics. She is also active as a pianist specializing in contemporary music. She is an associate professor at Winthrop University.