L’Équinoxe de l’âme (The Equinox of the Soul), for soprano, triple harp or kannel (an Estonian zither, part of the Baltic psaltery family), and string quartet, is based on a lyric text by the Persian mystic and philosopher Shahab al-Din Suhrawardi about the mythical Persian firebird Simurgh (using Henry Corbin’s translation of L’Incantation de Sîmorgh). The Simorgh is no mere phoenix, but a benevolent creature that guides the soul—it lives in a white world, manifests itself to us in daylight, and is too dazzling to view directly. This firebird is a creature of paradox, outside of space and the normal concerns of men; as the poem notes, “All are with it [the Simurgh], but most are without it.”<1>

Tulve’s music occupies a similar space of paradox: her vocal technique nods to Gregorian and Mediterranean vocal traditions.  But this voice is supported by a string quartet, whose members rely on trills and glissandi to blur the boundaries between pitch, timbre and rhythm. Ornamentation extends to frequent harmonics (string overtones), as well as on barely-pitched and pure noise tones. The quartet is accompanied by a triple harp, which makes use of “split doubling,” shakes and ornaments associated with Celtic folk harp traditions.  In L’Équinoxe de l’âme the timbre of instruments, particularly the sounds unique to the string quartet and the folk traditions associated with the triple harp, obscure clear melodic and harmonic cues.  Yet the entire piece is informed by a single-line impulse, blurred and compromised by the sonic flux around it: what was perceived as harmony becomes timbre or rhythm, and vice versa, For instance, clear emergence of a melody in first violin is echoed in remaining strings en route to the first entrance of the voice in m. 31, as can be seen and heard below. 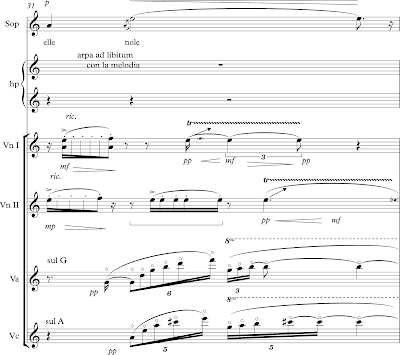 Tulve places melody in the center of her process, “as principle or linear current. … everything else must be in its service.”<2> Yet this current is clouded not only by ornaments but by voices, which arrive a step below or above an existing tone, amid frequent heterophonic duplication (inexact repetition). Strings play at the top of their range, with each tiny gesture approached and left by graduated dynamics: constantly pulsing between quiet and loud. Pitch and rhythmic tropes repeat—always with a difference—to shape the organic form of the work. And the ascent of an instrument through a harmonic series emphasizes central tones with a delicacy that emphasizes their impermanence.

One passage with a clear melodic and harmonic focus sets these instabilities in relief. A low Eb in cello in m. 75 comes to rest under a rare tonal harmony: a half-diminished seventh chord, under the text’s assertion that those protected by the Simurgh “will pass through fire, protected from being burnt” (see the example below). The harmonic collection built from this chord is resolved by parallel harmonic series that rise from two fundamental tones a tritone apart—Eb3 and A4—under the highest notes in violins. This flight of the protected through the flames is countered by a chordal descent in mm. 99–100 under a text where the Simurgh’s incantation “reaches everyone but only a small number listen.” <2>

All of Tulve’s works are unified by an aesthetic that prioritizes “slowness”: a careful attention to sonic transformation and flow that favors sustained listening.  Tulve’s timbral choices are bound to multiple sensations that drive the compositional process: the qualities of the “sound material” and its natural expression in space. Such a sustained focus on sonic detail functions as an ethical choice as well, reflecting the composer’s deep-rooted ecological concerns, bound to music of surpassing timbral richness and textural complexity.

Amy Bauer is Associate Professor of Music at the University of California, Irvine. She has published articles and book chapters on the music of György Ligeti, Olivier Messiaen, Carlos Chávez, David Lang, Helmut Lachenmann, Salvatore Sciarrino, Claude Vivier, the television musical, and the philosophy and reception of modernist music and music theory. Her books include Ligeti’s Laments: Nostalgia, Exoticism and the Absolute (Ashgate, 2011), and the collections György Ligeti’s Cultural Identities (co-edited with Márton Kerékfy, Routledge, 2017) and The Oxford Handbook of Spectral and Post-Spectral Music (co-edited with Liam Cagney and Will Mason, forthcoming).