By Ya-Hui ChengCui Jian, Chinese writer and musician, has long been an iconic symbol representing the voice of Chinese youth in the 1980s.<1> In particular, he is remembered for his performances of “Nothing to My Name” and “A Piece of Red Cloth” during the landmark 1989 Tiananmen Square student protest.<2> Debuting in 1986, “Nothing to My Name” was a groundbreaking song that demonstrated an authentic Chinese style of rock by applying folk tunes from the northwestern province that portray yearning from the Chinese youth who struggle with life’s challenges in a quickly transforming world. The song reverberated with those who sought a return to their cultural roots during the 1980s after China had adopted the capitalist model in 1978 to reform the economy. This return to Chinese cultural roots portrays rock music’s ability, as suggested by Firth, to “ express and reflect its audience’s concerns.”<3> As such, the song presented a successful example of fusing Western and Eastern musical ideas to portray the voice of Chinese youth for the commercial industry. “Nothing to My Name” was released on the album titled Rock ‘n’ Roll on the New Long March in 1989.<4>“A Piece of Red Cloth,” instead, is a slower tempo, rock ballad. It lacks the influence of Chinese folk tunes as a result of replacing the folk sounds with the Chinese Gu pentatonic scale. This song was written in 1988 and was officially released on the album titled Solution in 1991.<5> It demonstrates a stronger influence of Western rock than “Nothing to My Name” as the melody utilized the pentatonic scale to mimic popular Western melodies.<6> “A Piece of Red Cloth”  became an iconic piece to symbolize the Chinese social movement after the 1989 Tiananmen event where Cui covered his eyes with a piece of red cloth to perform for students. This image was included in Cui’s music video, which spread across the globe to remind people of this social event.<7> In addition, the video presents a social message based on Cui’s observation of an existing numbing attitude that had circulated around the Chinese Communist state and among people in the society. Cui reveals this sense of detachment by covering his eyes with a red cloth, implying numbness and also the unseen. This numbness and desensitization towards social issues increased the frustrations of China’s youth, who witnessed that many people had turned a blind eye to reality as a result from living under a collective social nuance. The song and video became  metaphoric symbols that both critiqued social passivity and the youth’s desire to push forward to reform.While “Nothing to My Name” and “A Piece of Red Cloth” have been popular for decades, the latter song contains a deeper social message and extends its influence from the generation of the 1980s back to the 1960s. Chinese popular music critic and author Jin Zhaojun has suggested that its lyrics presented the “innermost sorrow” to reassess the communist revolutionary ideology.<8> For the 1960s generation, the first group born under the red flag, and others who had experienced the Chinese cultural revolution, the image of the red cloth would have immediately implied the communist revolutionary ideology. The lyrics in which the master used a piece of red cloth to cover the protagonist presents the implication that the state uses the revolutionary ideology to cover the mass’s sight and creates a blinding collective nuance that separates people from the reality. The blindness allows one to become unmotivated thus creating social problems that prohibited the society from moving forward. 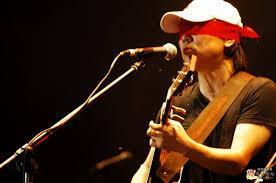 Musically, this piece is based on a contrasting verse and chorus structure (see Example 1). The lyrics in the verse portrays the protagonist’s enthusiasm to follow the master while being naive in considering other life paths. The melody in the verse presents a narrowness by limiting the vocal range within an interval of a perfect 5th between pitches A3 and E4. The chorus presents the inner contradiction of the protagonist who realizes the issues, but was dissuaded to accept them. The sense of contradiction is presented by raising the voice higher and extending the intervallic range to a sixth, from C4 to A4. In the post-chorus, the protagonist has been stuck with no way out. This part is the climax and depicts the protagonist’s emotions altered from frustration to empathy. Instead of complaining to the master, the protagonist becomes the master when both realize they share an innermost pain. The vocal range extends to an interval of a tenth, from A3 to C5. It contains a leap of a perfect 4th depicting a mixed feeling of sorrow and tolerance along with shifts of revolt to compliance. The accompaniment is based on an ostinato that consists of four chords from Bb to Eb and to c minor and Bb, which creates a drone in the background to hold one grounded in a repeating cycle. The aporic drone illustrates the inescapable helplessness creating a collective nuance in a society where most people can become numb.
Example 1: A Piece of Red Cloth – Structure and Lyric (Translation Mine)

Verse A1
That day, you used a piece of red cloth to cover my eyes and my sight,
You asked what I saw, I said I saw a completely delightful world.

Verse A2
Such a feeling comforts me, it makes me forget myself and I have nowhere to stay,
You asked me where I want to go, I said I want to follow your way.

Verse A3
[I] Could not see you, I also could not see the road. My hands were held by you.
You asked what I was still thinking, I said I would let you decide my way.

Chorus B1
I feel you are not made by iron but you seem to be as strong and tough as iron,
I feel there has blood in your body because your hands are so hot.

Chorus B2
I feel this is not the wideness, but [I] could not see the land has already dry and dried
I feel I need some water, but you blocked me by putting your lips onto mine.

Post-Chorus
I could not go. Neither could I cry, because my body has dried out.
I want to stay with you in this way forever because I know most about your deepest pain.

“A Piece of Red Cloth” beautifully combines lyric and music to metaphorically reveal realistic social problems which evoke everyone to contemplate the red ideology and the unseen reality. Cui’s anxiety and sincerity are represented through rock to inspire people to alter the unsatisfied condition. It is through this earnest expression on the social problems of the time, Cui Jian and his music establish a Chinese rock spirit that became an iconic social symbol in the 1980s.