Jōji Yuasa (b. 1929) is one of the most important Japanese composers of the second half of the twentieth century and the early part of the twenty-first century. Along with his compatriot, Tōru Takemitsu (1930-96), Yuasa was a member of Jikken Kōbō (The Experimental Workshop), an interdisciplinary group of composers, artists, and writers that sought to define a characteristically Japanese avant-garde aesthetic in the 1950s. Musicologist Luciana Galliano has described the aim of Jikken Kōbō as follows: “The group’s intent was … to mediate Japanese sensibility with the tantalizing, unknown material of western contemporary music in order to achieve an original compositional expression which corresponded, in turn, to personal expressive desires.” <1> One of Jikken Kōbō’s activities was a series of concerts that featured music by Western modernist composers—among them Schoenberg and Messiaen—as well as new works by the group’s members. Yuasa’s Cosmos Haptic (1957) for piano, the opening measures of which are shown in Example 1, is a representative work from this period. (The score is available from Schott Music.)

A recording of the work may be heard here.

One of Yuasa’s sources of aesthetic inspiration at this time was the traditional Japanese Nō theater. <3> Characteristic of Nō is the slow and stylized intonation of text in which the durations of individual syllables vary within an eight-beat pattern known as honji. “Differing from metric systems with four or eight beats such as are found in Western music, … honji is essentially based on a substructure of single beats. These are assumed to be even, as in a metronomic continuity, but, actually, each beat has its own ma [space] which shapes the substance of its continuity.” <4> Variations in the durations of the beats are known as mitsuji, which Yuasa has cited as an inspiration for the final movement of his Projection for Seven Players (1955-56), the work immediately prior to Cosmos Haptic. <5> A pattern of eight articulations of varying duration, likely also inspired by mitsuji, may be observed at the opening of Cosmos Haptic. Eight articulations are presented in the upper staff in Example 1, with the eighth-note rest in m. 3 dividing them into two groups of four. The first three articulations decrease in duration, with the duration increasing again from the third to the fourth articulations. The durations among the four articulations in the next group (in mm. 3-4) also first decrease, then increase.

Another source of inspiration for Yuasa was the harmonic language of modern Western composers, both twelve-tone and non-twelve-tone. Among twelve-tone composers Yuasa favored Webern, the temporal nature of whose music suggested an affinity with Eastern aesthetics. Describing his discoveries in the 1950s, Yuasa wrote, “I was the then finding that a commonality existed between the timespace of Nō and that of Webern’s music.” <6> Webern’s austere approach to twelve-tone composition provided a model for Projection for Seven Players (1955-56). For Cosmos Haptic, on the other hand, Yuasa turned to harmonic resources associated with Messiaen. <7> In his implementation of these harmonic resources—such as Messiaen’s modes of limited transposition—Yuasa preferred an austere style that he associated with the music of Varèse and Jolivet more than with that of Messiaen. <8>

The opening measures of Cosmos Haptic present two of Messiaen’s modes of limited transposition. The harmonic units articulated on the surface of the music are four-note groups, an initial group along with three of its transpositions: F♯-G♯-C-D in the upper staff, C♯-D♯-G-A in the middle staff, and A♭-B♭-D-E, and F-G-B-C♯ in the upper staff. When these four-note groups are combined in successive pairs, instances of two of Messiaen’s modes result: Mode 4, C-C♯-D-D♯-F♯-G-G♯-A, is presented in mm. 1-3 and Mode 2, C♯-D-E-F-G-A♭-B♭-B, in m. 4. <9> Additionally, the combination of these two eight-note modes results in the presentation of the aggregate of all twelve chromatic pitch-classes, which is completed by the final chord in the passage. Aggregate completion is a structural principle that is fundamental to twelve-tone composition but is observable in the music of some non-twelve-tone composers as well. <10>

A further characteristic that Yuasa’s Cosmos Haptic shares with the work of modern Western composers is the symmetrical disposition of its pitches around axis points within pitch space. <11> Each of the four-note groups in Example 1 is symmetrical around a different axis pitch. Within the first group, the pairs of pitches F♯5/G♯5 and C5/D6 are both symmetrically disposed around G5, which is not sounded but serves as a point of orientation around which the other pitches are situated. The axis pitches for the remaining groups are D4, A5, and F♯6. Overall, the roving axis pitches indicate motion in the treble range that moves higher as the excerpt progresses. Stepping back from the level of local details to take in longer spans of music, analysis according to axis pitches suggests the slow unfolding of a deliberate process. The eight-note group in mm. 1-3, for example, is symmetrical around a pair of axis pitches, A♯4/B4, which precisely fill in the space between the A4 at the top of the lower four-note group and the C5 at the bottom of the upper four-note group. The eight-note group in m. 4 is symmetrical around the pair of axis pitches, C♯6/D6. One member of this pair, D6, appears on the downbeat of m. 4 as part of a three-note fragment, repeating part of the first four-note group. Rather than appearing to be a merely incidental detail, D6 may be interpreted as a link in pitch space between the first and second eight-note groups.

The structural role of symmetry becomes even more prominent in the dramatic conclusion to the first section of the work, a portion of which is shown in Example 2. In this passage, musical materials from the opening of the work are transformed and recontextualized. The first four-note group from mm. 1-3 in Example 1 reappears as the upper strand of the middle staff in m. 11 (the first measure of Example 2) in a rhythmically concentrated form. The lower strand of the middle staff of the same measure presents a new four-note group, a transposition up a major second from the four-note group that had appeared in the middle staff in mm. 2-4. As a result of this transposition, the combination of the two four-note groups in m. 11 does not produce an instance of Messiaen’s Mode 4, as it had done in mm. 1-3, but instead forms a new instance of Messiaen’s Mode 2: D-E♭-F-F♯-G♯-A-B-C. The transposition also causes the previous pitch axis of A♯4/B4 from mm. 1-3 to shift up a minor second to B4/C5 in m. 11. This new pitch axis is maintained in m. 12, where the notes of Mode 2 from m. 11 are revoiced in a way that highlights its dissonant intervals: two minor ninths in the outer staves surround two tritones in the middle staff.

The transformation of previously heard materials continues at the beginning of m. 13, where the four-note group in the upper strand of the middle staff recalls the four-note group from m. 4. In m. 13, this four-note group combines with the four-note group that had been introduced in the lower strand in m. 11 to form a new instance of Messiaen’s Mode 4: D-E♭-F-F♯-G A-B-C. At this point, both the upper and lower four-note groups from mm. 1-3 have been transposed up by a whole step. Consequently, the pitch axis has shifted upward again, to C5/C♯5. This shift of axis creates a momentary disruption in the equilibrium of the passage, which is restored in the middle of m. 13, where the axis returns to B4/C5, where it had been in mm. 11-12. At this point the transposition of Mode 2 that had been introduced in mm. 11-12 returns in a new voicing: the minor ninths that appeared in the upper and lower staves in m. 12 have now been inverted to become major sevenths in m. 13.

Further transformations of materials in Cosmos Haptic include the reshaping of the eight-note mode from mm. 1-3 into an unaccompanied melody (not shown). This melody, whose range and contour suggest an affinity with the nōkan (Nō flute), forms the basis for an extended middle section. <13> Musical gestures related to the work’s opening recur intermittently during this middle section and return at its closing. The slow processes of transposition initiated at the start of the work continue throughout, so that its conclusion does not form a closed circle with its beginning, but rather suggests an opening out to an as-yet-undetermined future.

Cosmos Haptic is a pivotal work in Yuasa’s development as a composer. From this point forward, Yuasa has continued to forge a personal synthesis between harmonic resources typically associated with Western modernism and what he refers to as “traditional Japanese concepts of time.” <14> Among his later works are four more bearing the title Cosmos Haptic. This series includes solo, chamber, and orchestral works, the most distinctively Japanese among them being Cosmos Haptic III – Kokuh for twenty-string koto and shakuhachi. <15> In these works and many others, Yuasa has succeeded in generating an oeuvre that richly rewards repeated, attentive listening. 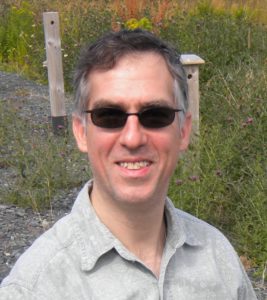 Ron Squibbs is Associate Professor of Music at the University of Connecticut, Storrs. He has published on the music of Iannis Xenakis and has presented on the music of Xenakis, Yuasa, Rudhyar, John Luther Adams, and others. He has recorded piano music by Yuasa and Rudhyar for Aucourant Records and by Peter Garland for Cold Blue Music (forthcoming). Further information on his research may be found at https://ronsquibbs.academia.edu/.