In his discussion of literary forms during the period of global modernism, Ramazani (2016) argued that the commonly used scheme of foreign form and local content (abbr. FFLC) neglected transcultural materials and favored Western centricity, a trend inherited from colonialism. To comprehend the local elements, Ramazani suggested three schemes to examine local aspects: foreign form and foreign content (FFFC), local form and foreign content (LFFC), and local form and local content (LFLC). Those schemes complement FFLC to formulate additional analytic devices in studies of global modernism in the twentieth-first century, or geomodernity as specified by Gavin Lee (2019).

A similar challenge occurs with the study of transcultural meaning in musical discourse when defining authentic musical vocabulary from the otherness in world music programs in the West. The main issue remains similar to Ramazani’s in that the boundary between foreign and local aspects is hard to delimit and easy to oversimplify or mistakenly dichotomize. Similarly, the notion of otherness in studies of cultural displacement resonates with the condition of intimacy between private and public realms. <1> These perspectives form the debate on the music for young adults in China in the Post-Mao era when China opened its domestic market to the free world. At the time, the most well-known youth music was Northwestern Wind rock, which integrated foreign and local elements to present the intimacy between the public and private realms. The styles of rock music from the free world inspired youth in China. In the meantime, the ongoing domestic root-seeking program also motivated youth to consider renovating the cultural tradition. Chinese youth adopted folk songs from the Northwestern province and synthesized them with the Western rock to present a type of rock sonority that was replete with Chinese characteristics. This music received global attention when Cui Jian performed his Northwestern Wind rock song Nothing to My Name at the 1989 Tiananmen Domestic Incident. After that, the image of Cui Jian and his rock signified Chinese youth rebellion, which has been frequently studied. <2>  Among the authors who have addressed this phenomenon, de Kloet used “rock mythology”, which includes a list of assumptions about the rebellious spirit of rock in China and elsewhere, to argue that many of these studies proliferated rock’s public intimacy from the West to China. <3> They transformed the Northwestern Wind rock into a collective global memory of Chinese youth rebellion.

Whereas global memory could conflict with local memory (Huyssen 2003), Chinese songwriters stayed tied to the local cultural environment. They claimed that sociopolitical rebellions were not their concern (Cui Jian and Zhou Guoping 2012). Instead, it is the expressive quality from Northwestern folksongs that depicted their sentiments and motivated them to renovate this tradition. This renovation coincidentally connected them with the global pop trend through its cultural roots. Cultural insiders supported this statement and claimed to own the music’s authorship because their heritage of this folk tradition can be traced to centuries long ago (Brace 1991).

Audiences outside of China interpreted the sounds to be derived from global impacts or from Western pop cultures and presumed its raw expression to be from the spirit of Western rock. There is an apparent discrepancy within this interpretation. The examination of the structure of the Northwestern folksong and its social function can clarify the debate. Northwestern folksong often utilizes a two-part format, similar to verse and chorus. This music is distinct from folk music in other provinces in China. Partly, its motivic pattern is concise, and partly, its phrase structure is symmetrical. These features of Northwestern folksong resemble similar elements in the music of the West, which in turn suggests a musical connection between China and the West has existed in the folk tradition. Furthermore, Northwestern folksong had been the primary resource to produce communist Red songs and disseminate the Red ideologies during the wars between the Chinese Communist and Nationalist Parties before 1949 and before the importation of Western folk-rock into China. By transforming Northwestern folksong into rock in the 1980s, this music continued the propagandistic function to support the socialist social reform across the nation. This is evident when Cui Jian stated that his songs were devices to arouse reform, and this music is “the most comfortable musical language” for him to depict the socialist style of individualism. <4>

Likewise, folk-rock produced in Taiwan and Hong Kong from the 1970s was popular in China. Unlike the rock music made by the youth in mainland China, music from Taiwan and Hong Kong mimicked Western rock to build the Western-influenced youth culture. If “the discourse of mimicry is constructed around an ambivalence,” as Bhabha suggested, the mimicry signified a prototype that resulted in variation in the folk-rock of Taiwan, Hong Kong, and China. <5> Young adults in China received the spirit of rock from Taiwan and Hong Kong, but they adjusted the musical language by adopting the authentic folksong to describe their cultural intimacy. The outcome expresses liberation from the Western influences because the applied musical language is from Chinese cultural tradition, which, coincidentally, is comparable with that of the West. The liberation reconfigured the colonial concept of mimicry from the Westernized Chinese societies of Taiwan and Hong Kong. It removed the notion of the spirit of Western rock, established China’s own youth characteristics in the Post-Mao era, and declared that any foreign production that wishes to be accepted by the Chinese people must connect with the Chinese cultural tradition and absorb the local socialist attitudes.

The integration of Chinese tradition in popular music production can also be found in the 1930s Shanghai Jazz period in the first Chinese popular song—Drizzle. This song was written by Li Jinhui in 1927 and recorded in 1928 and 1934, respectively. Li adopted the verse form and Chinese pentatonic music to present the modern style of sounds that Chinese audiences referred to as a “familiar and simultaneously strange” listening experience. <6> For Li, the ambiguous listening experience indicated his strategies in songwriting. Li suggested that while most Chinese people only listened to Chinese theater music, he intended to create a fusion style of music that integrated Chinese tradition and music from modern societies such as America and Japan. By doing so, he implemented the concept of modernity to everyday listeners while retaining the Chinese characteristics to attract traditional Chinese theater goers (Li 1982). The music that indicated familiarity with Chinese cultural insiders resulted in the estrangement of cultural outsiders and vice versa. The quality of authenticity became vague as its delimitation depended on the listener’s cultural background.

In effect, although Ramazani suggests a multi-purpose framework that revives the contents of cultural diffusion, my work on the Chinese fusion style of popular music suggests another dimension for consideration. Transcultural aspects are not the sole factor in the studies of local and foreign influences in content or form. Delimitation and authorship should be part of the discussion. If using the previous example of adaptable Chinese melodies, materials from the local aspect are subtly selected because they coincide with that of the global aspect. Chinese songwriters primarily adopted folksong that contained similar structures as Western popular music. If we study those Chinese popular songs, how can we delimit the local and global elements? In an intensively globalized world, when a sophisticated cultural understanding purposely aims to present multiple contextual meanings for any global citizen to feel related to the original source, who can claim the authorship or make a cultural delimitation?

<1>. The special issue of intimacy in the Journal of Critical Inquiry, where Berlant specified that intimacy “involves an aspiration for a narrative about something shared” (1998): 281, has been an inspiration in this article.  Intimacy speaks the inner sentiment in the private realm which could turn into public sentiment when a shared feeling is discovered and expounded. 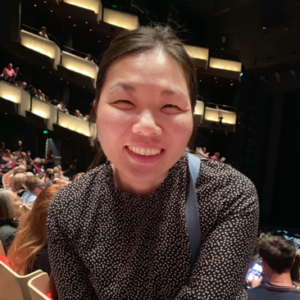 Ya-Hui Cheng, a native of Taiwan, is Assistant Professor of Music Theory at the University of South Florida. Her current research focus is on the emergence of Chinese popular music including jazz, rock and hip hop and their impact on the capitalist and socialist societies of Taiwan and China. Other than popular music study, Dr. Cheng also works on Giacomo Puccini’s operas. She was the recipient of the National Opera Association Dissertation Competition Biennial prize for her Puccini research and is the author of book Puccini’s Women: Structuring the Role of Feminine in Puccini’s Opera.

Jones, Andrew. Like a Knife: Ideology and Genre in Contemporary Chinese Popular