The 1986 First International Gamelan Festival and Symposium (Expo ’86) was a catalytic event in the globalization of Indonesian gamelan music. Though gamelan ensembles had already been established in different nations and cultural settings around the world—largely because of university ethnomusicology programs—Expo ’86 marked the first formalized event to bring international groups together. The event engendered numerous intercultural collaborations among its participants, especially between composers of experimental music. One of the composers to attend Expo ’86 was Rahayu Supanggah (b. 1949). By the time of Expo ’86, Supanggah had already established himself as a leading composer in Indonesia, served as director of the karawitan (classical gamelan music) department at the conservatory in Surakarta, Central Java, and received his Ph.D. in ethnomusicology from the University of Paris Diderot. <1> Despite Supanggah’s achievements, his music was relatively unknown among the North American and European composers he met at Expo ‘86. <2> The symposium brought together artists of diverse nationalities, inspiring dreams of what American composer Philip Corner imagined as a “quasi-international avant-garde tradition.” <3>

Taking part in that shared dream, Supanggah later participated in a five-week residency in 1991 with New York based composers’ collective and repertory ensemble Gamelan Son of Lion. <4> During his residency, Supanggah regularly rehearsed with composer-members of the group, participated in collective composition projects, and recorded a one-hour free improvisation with Corner. <5> After getting acquainted with Gamelan Son of Lion’s post-Cagean approach to playing and composing for gamelan, Supanggah composed Paragraph (1991), an experimental composition that renders both the enticing and challenging aspects of intercultural collaboration audible. Supanggah explains that this piece “represents a part of my experience working with American gamelan players, just as a paragraph is a portion of a larger essay.” <6>

Intercultural collaborations are challenging by nature. As Supanggah observes, even in situations where all parties meet with the best of intentions and mutual respect, the realities of post-colonial hegemony often lay just beneath the surface: “Up to the present time, the majority of collaborations between artists from different cultures or countries has been … with more orientation towards the West.” <7> In composing Paragraph, Supanggah had to orient his approach toward the abilities of his Gamelan Son of Lion collaborators. Whereas Supanggah is a recognized master of both traditional Central Javanese music and experimental composition, the musicians of Gamelan Son of Lion were relative novices in Karawitan, having focused almost exclusively on idiosyncratic ways of writing and performing gamelan music. This discrepancy became axiomatic to Supanggah’s concept for this piece, writing: “In [my] compositional process, I usually work with musicians who are familiar to me. This, however, is a new experience for both composer and musicians. As a way of sharing with these new musicians, I have used some fundamental Javanese techniques in this piece, as well as some new ones.” <8>

Paragraph consists of five distinct, but contiguous sections (labeled I–V). It uses the two common Central Javanese scales pelog (seven-tone hemitonic) and slendro (five-tone anhemitonic). <9> These scales are notated using a form of cipher notation known as kepatihan that assigns Arabic numerals to different tones: 1, 2, 3, 4, 5, 6, 7, for pelog and 1, 2, 3, 5, 6 for slendro. It is critical to note that although some notes between scales share the same numeral, that does not necessarily mean they are of the same pitch. <10> Though traditionally these scales are not mixed, Gamelan Son of Lion composers experimented with combining these scales to create new ones beginning in the 1970s. In Paragraph, Supanggah does not combine the scales, but instead, juxtaposes them in such a way that each retains its own identity while sometimes sounding simultaneously.

The opening of the piece (Part I) uses the pelog scale and features a simple repeating cycle. The instruments used here are mostly keyed metallophones that each play one octave of the scale. From the highest octave to the lowest, these metallophones are called peking, (labeled SP in Example 1), saron (SB), demung (DM), and slenthem (SL). These instruments join the piece one at a time in descending order from highest to lowest in a gradual process of accumulation. Such processes are fairly typical of Gamelan Son of Lion compositions, and Supanggah’s adoption of it here may be a nod to the group for which the piece is composed. In Example 1, all parts are notated together despite entering one at a time to save space in the score.

Once all of these melodic instruments are present, the large gongs begin to articulate a colotomic structure reminiscent of a karawitan composition. After a few repetitions of this complete texture, a brief transition played in unison leads to Part II, in a tempo twice as fast as that of Part I and using a different pathet (mode) of the pelog scale that ushers in a new character. This lively, jubilant section expresses a feeling of excitement in terms of both tempo and tonality, alternately cadencing on pelog 6 and 7. The mood seems to suggest the sheer joy of playing together and the sense of excitement swells before coming to an abrupt halt.

Part III follows immediately with more contemplative, pensive mood. It consists of an improvisation played on gender (multi-octave metallophone), suling (end-blown bamboo flute), and Chinese erhu (bowed spiked fiddle). This improvisation is modeled on the Central Javanese practice of pathetan, short pieces in free rhythm in which three or four instruments weave together their semi-improvised melodies that diverge from and converge to goal tones. <11> The use of pathetan, a subtler genre of Central Javanese music, suggests more than a mere aesthetic contrast to Part II. Whereas the composer-musicians of gamelan Son of Lion have a proficiency in playing the basic instruments of a gamelan, pathetan requires a deeper knowledge of Javanese music theory than most of the musicians have had. By including a pathetan in this composition, Supanggah brings into focus some of the limitations of collaboration itself: the abilities of all collaborators shape the potential of the results. For Paragraph, the pathetan was played by Supanggah, his colleague composer I Wayan Sadra, and ethnomusicologist Barbara Benary, excluding the musicians who lacked such skills.

Part IV begins immediately as Part III comes to close. The ensemble gradually re-enters the piece through another accumulating process that layers different ostinati in the slendro scale. Once all of the ostinati are cycling, the texture devolves into a free improvisation involving all manner of instruments. <12> This section taps into the egalitarian idealism often associated with free improvisation and which some members of Gamelan Son of Lion projected onto gamelan ensembles in general. <13> This improvisation builds in intensity, and then begins to simplify and become quieter, leading to the fifth and final section. 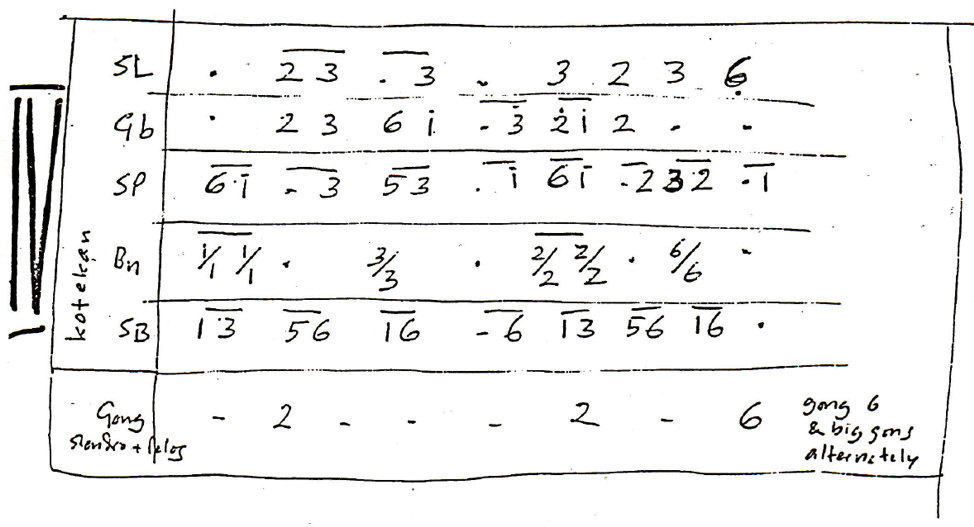 The parable of collaboration culminates in Part V. This section brings together the themes that preceded it in stark juxtaposition. Some of the instruments return to the pelog material of Part II, while other instruments introduce a new melody in slendro, creating haunting effect. The jubilant melodies from Part II emerge first, insistently silencing the collective improvisation of Part IV and asserting one vision of unification out of the chaos. But that vision is subverted shortly thereafter by the slendro material that articulates a contrasting, even incompatible vision of its own. The mixing of these scales is highly unusual in a traditional setting, and the dissonances created through this juxtaposition are recognizable even to the uninitiated listener. We learn at the end that no true synthesis has occurred in the course of the collaboration. Each theme remains effectively unchanged by the encounter and unobservant of the other cohabitating the musical space. The piece is suddenly brought to an end by a stroke of a gong, with no resolution of the dissonant mash-up.

Throughout the piece Supanggah guides the listener through a journey. Each section can be understood to represent a certain aspect of the collaborative process: methodical discovery; excitement; realization of limitations, exploration; and finally, Paragraph presents a skeptical outlook on the nature of intercultural collaborations. It is a well-crafted composition that techniques of New York experimentalism and Central Javanese karawitan alternate. But Paragraph does not simply celebrate its syncretism or reassure the listener of an unproblematic multiculturalism. Supanggah encourages us to consider the kinds of compromises that must be made in such collaborations and who is expected to make those compromises. He writes, “It is not uncommon, due to a high level of enthusiasm and willingness to make sacrifices, for a participant to be ‘willing’ to throw off his own identity, and subsequently melt and become or make something new … based on inadequate (mutual) understanding.” <14> In some ways Paragraph can be heard as such a capitulation to the limited abilities of the group. But the ending juxtapositions suggest a more complicated interpretation in which the composer refused to compromise his own artistic sensibilities and instead utilized the imbalanced experiences of the performers to formulate a deeper meaning for the composition.

<2> Today Supanggah is internationally recognized for his own compositions, scholarly writings, and for his numerous high-profile intercultural collaborations such as Peter Brook’s Mahabarata (1994), Ong Keng Sen’s Lear (1995), and Robert Wilson’s I La Galigo (2004), and Garin Nugroho’s Opera Jawa (2006) and Setan Jawa (2017).

<4> The residencies were organized by composer Jody Diamond as part of the Festival of Indonesia, a series of NEA sponsored events that took place in different locations around the United States. The residencies produced several compositions and collaborations between American and Indonesian composers that are documented and recorded in Jody Diamond, “Interaction: New Music for Gamelan,” Leonardo Music Journal 2, No. 1 (1992): 97–98.

<9> The score for Paragraph is published by the American Gamelan Institute. Accessed August 8, 2020, http://www.gamelan.org/catalog/scores.shtml

<10> In fact, the tuning of each gamelan is unique, and compositions generally sound different when transferred from one gamelan to another. Gamelan Son of Lion’s scales share two common tones between the scales known as tumbuk. Pitch 6 is the same between slendro and pelog, and slendro 5 is the same pitch as pelog 4.

<12> In the recording and premier performance, this improvisation involved the full gamelan, clarinet, electric bass, erhu, piano, suling, trombone, and violin, though any other instruments would also be accepted.

<13> For example, See Daniel Goode, “How Can the Orchestra be More Like the Gamelan?,” New Music Box, accessed October 2, 2020, https://nmbx.newmusicusa.org/How-Can-the-Orchestra-Be-More-Like-the-Gamelan/

Jay M. Arms is a lecturer of ethnomusicology at the University of Pittsburgh where he teaches the West Javanese gamelan ensemble. His research focuses on the globalization of gamelan music and its intersections with American experimental music and ethnomusicology. He is the co-editor of the journal Balungan that regularly publishes articles and scores related to gamelan and its related arts.